Quite often we boat up at the end of Indian Arm, behind Croker Island and across from Granite Falls.  The cell reception is spotty at best and it really depends on where you are standing on the dock or where you are in your dinghy out in the bay.  There are a number of cellular to WiFi modem solutions, such as the Rogers Rocket Hub or the Telus Smart Hub, but I didn’t want to sign up to a monthly service. I also didn’t want to spend a lot on the initial hardware purchase or have something hard-wired to the boat. 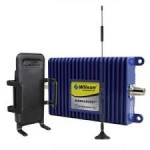 I decided to try out one of the less expensive cell boosters to see if it would actually make a difference.  There are two choices, a wired booster which only works with one device at a time or a wireless booster, which has weaker amplification but serves multiple devices at once.  I chose the Wilson 811214 Cellular Signal Booster which retails for about $200.  The kit comes with a powerful, solid 3-Watt Dual Band (850/1900 Mhz) amplifier, an external antenna and a cradle kit.

The Wilson Cell Booster is easy to set up, the amplifier has a power cord (or cigarette lighter adapter), a corded antenna which we ran to the top of the arch, and a corded cell phone holder.  It makes for a lot of long wires but it will be easy enough to hide so we can leave it installed, if we choose.  You simply place your phone in the cradle and the Wilson does its stuff.  All three devices immediately went to full bars of service.  We were even able to watch a hockey game on our iPad!  I was quite impressed with this unit and will keep it on the boat.  The Wilson Electronics website shows the product out of stock but I was able to find it on-line at Amazon, Future Shop and The Source.