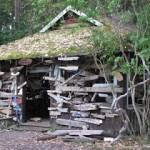 One of my favourite marine park anchorages is Conover Cove on Wallace Island.  The island is 72 hectares in size and is located in the Trincomali Channel between Galiano Island and the northern tip of Saltspring Island.  The Island consists of the Marine Park with two anchorages (Conover Cove and Princess Bay) and two private residences.  Many years ago I read the book “Once Upon An Island” written by David Conover about the trials and tribulations of building a summer vacation resort on Wallace Island during the 1940’s.  It was a great read and I had to visit to see it for myself.

I did some research and found that the Island was originally charted as “Narrow Island, was named after Capt. Wallace Houstoun, who first surveyed the area in the 1850s. There are a couple of old fruit trees which mark the remnants of the garden and orchard planted by Jeremiah Chivers, a Scotsman who retired there after unsuccessful adventures in the interior gold rushes. Chivers lived alone on the island, never marrying, and died there in 1927 at the age of 92.  After the Second World War, David Conover and his wife, Jeanne, purchased the island.  Together they built a bed and breakfast style resort called the Royal Cedar Cottages.  In the mid to late 1960’s, the Conovers sold the majority of the island to a group of teachers from Seattle. Disagreements among the owners led to court proceedings and the property was again put up for sale. Wallace Island was purchased through the court ordered sale and became a provincial marine park in 1990 through the cooperative efforts of the provincial government and BC Marine Parks Forever.  This historical information can be found at http://www.env.gov.bc.ca/bcparks/explore/parkpgs/wallace/

The entrance to Conover Cove is quite narrow, shallow and flanked by a large unmarked reef so watch your chart and tides.  On a zero tide much of the edges of the cove are dry so the favourite stern ties are located towards the middle of the cove and on each side of the dinghy dock, there are rings painted orange.  Our boat draws about 3 feet and we have found ourselves in 6 feet of water at a low tide many times.

The Island has a great trail that leads through the campsite to a large field with an old tractor and is a great place to walk your dog.  The highlight of the island for me is a small cabin where boaters leave placards with their boat name and when they visited.  You could be in there for hours readingnotes left by visitors from far and wide.