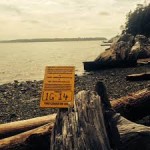 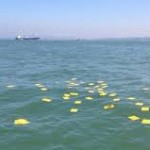 On August 26th researchers at the Raincoast Conservation Foundation, the Georgia Strait Alliance and Friends of the San Juans (USA) teamed up with the City of Vancouver to simulate an oil spill on the Fraser River and in Burrard Inlet.They released over 1,000 biodegradable, yellow, plywood drift cards, each marked with a unique serial number.  Beach walkers, boaters and concerned citizens were asked  to report where they found the card, at www.salishseaspillmap.org  The information collected by scientists will help map the paths that oil spills might take and how far the oil may travel.

“Kinder Morgan’s plan for a seven-fold increase in oil tanker traffic through our local waters represents an enormous threat to our economy and environment,” said Mayor Gregor Robertson. “The drift card project will provide important new insight into the significant risks of a major oil spill, and I encourage everyone to get involved by looking out for drift cards on our beaches and shores.”

Results from a similar drop in December, 2013 found cards along most of the south coast of Vancouver Island from Sidney to Tofino, the San Juans, the southern Gulf Islands and the north coast of Washington’s Olympic Peninsula.  Drift cards washed ashore quickly, travelled rapidly and were still being found weeks after the initial drop.

The Raincoast website even offers a “Take Action” page where you can email your elected representative and ask him/her to take action.  If you don’t know who they are, check out MLA Finder or MP Finder.