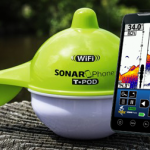 This is a very cool idea. It looks like a tennis ball but it is a portable WiFi fish finder.  The Vexilar SonarPhone T-Pod Sonar/Transducer can be cast, thrown from shore or pulled behind your boat.  The SP100 has a single beam, 30 degree wide-angle beam signal using a 125 kHz transmit frequency.  It has a self-contained battery that turns off automatically to save power, is charged through a computer USB port or the included USB wall plug charging cube and lasts up to 4 hours on a single charge.

The website claims the SP100 T-POD is the most powerful portable WiFi transmitter in the world and will rival most high-end sonar on the market. It uses patented WiFi signal technology to transmit a full color, HD quality signal right to your smart device. And, you don’t need cell phone coverage to use it, the SonarPhone creates its own WiFi hotspot so you can share your signal with as many people as you wish, the software App is downloaded for FREE from the App Store or Google Play and works with both Android and IOS systems.

It retails for $130 and the only downside I can see is that it has a maximum depth range of 120 ft.