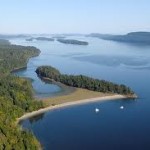 Walker Hook can be found on the north end of Saltspring Isand in the Trincomali Chanel and boasts one of the Top 5 beaches/spits I have visited in the Gulf Islands. We often anchor just off the beach and take the dinghy in for the day. I recently read a story published by Raincoast Books about Toni Onley, a very well known BC artist. He had landed his airplane on the beach at Walker’s Hook and got stuck in the sand. At the time is was a nudist colony and a dozen inhabitants rushed to help him push the plane off! The story goes that a week later he was back in Vancouver walking down Georgia Street and was approached by a well-dressed women who was quite amused that he did not recognize her.

This site uses Akismet to reduce spam. Learn how your comment data is processed.